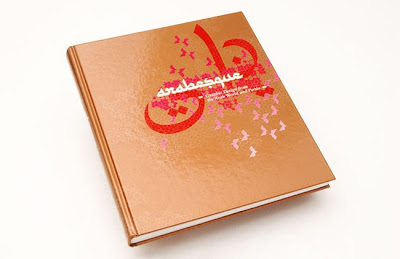 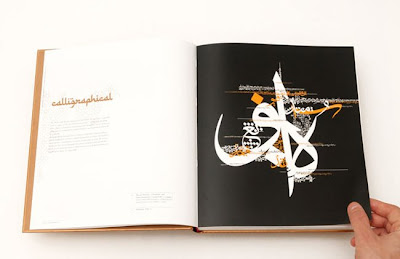 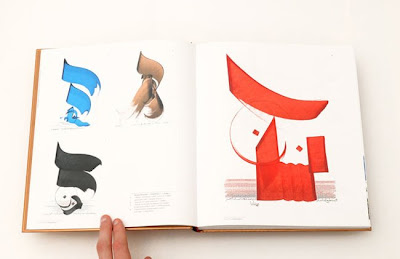 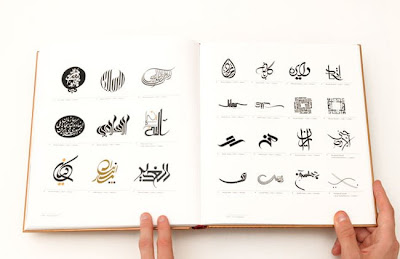 Here is my new favorite book, which made me immediately go and buy a dozen of calligraphy for dummies-like books to learn the fundamentals of this amazing art of calligraphy. The book talks mainly about the subject that I once touched upon in the last post of my calligraphy series.

Published by Gestalten and edited by Ben Wittner and Sascha Thoma of eps51 and Nicolas Bourquin of onlab, the book contains excellent examples of the "globalization of graphic design" which allowed for merging different cultures into a new graphic blend. Besides the wonderful pictures that you can look at for hours before going to bed, there is this impressive font that you get for free if you buy the book. The new font is called Talib OldStyle, an English type that is based on Arabic alphabetical visual characteristics. The font belongs to the Talib Type group of fonts developed by eps51. Here are few examples for you viewing pleasure.

Check this out for an interesting interview with the people behind the book.
Posted by Bash Mohandis at 21:18 No comments: 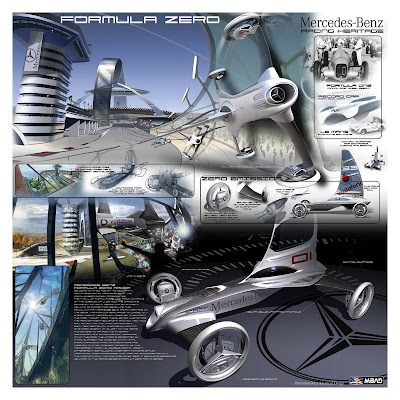 The LA Auto Show's Design Challege this year have witnessed some amazing entries from Audi, BMW, Mazda, Toyota, as well as other manufacturers. But Mercedes have came up with this amazing concept that could be the begining of a really interesting sporting event, which they call Formula Zero.

The main goal is not simply to finish first as in most other motorsports, but with how energy efficient the winner is. Each team would be allocated the same amount of stored energy and it is left to the teams and drivers to manage the variables to win the race. The winner, therefore, is determined by total elapsed time combined with the energy efficiency factor.

The Formula Zero Racer is loaded with technology designed to extract the maximum thrust from the electric hub motors, aero-efficient solar skin and high-tech rigid sail... Incorporating luxury racing with the thrill of Formula One, the track dynamics of the bobsled or luge, and the grace and efficiency of yacht racing.

More info here and here.
Posted by Bash Mohandis at 17:43 No comments: 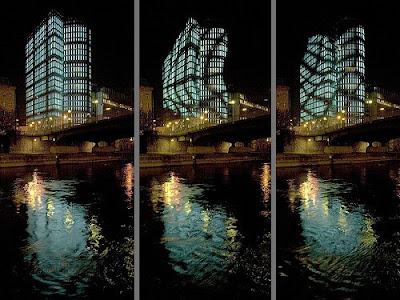 A while ago I went on about the building business being a team sport. Now I saw this incredible building and those thoughts came straight back to me.

This is the UNIQA Tower in Vienna, designed by Austrian architect Heinz Neumann and completed at 2004. It sits on a canal and creates a physical link between the city's old and new sections. According to the architect, “the building shoots up spiritedly, emotionally, opening out and almost playfully. Its shape absorbs the impetus of the UNIQA logo and transforms it into architecture, with interior and exterior openness dominating.” Its a good looking building when it was finished but it wasn't as incredible as it is today.

What makes the tower amazing is the LED light installation which transformed the tower into a landmark in Vienna thanks to its interactive facade. Completed 2 years later, the installation is designed by lighting designers Licht Kunst Licht, installed by LED display manufacturer Barco, with German digital artists Mader Stublic Wiermann working on the artistic animation.

The facade's double skin allowed for the placement of the LED modules that receive electronic data on the structural grid, creating interplay between the architectural and technical elements of the facade. Thus, the building is not a giant electronic billboard like the ones you see in Manhattan or Las Vegas; it is a "constantly modulating architectural form." First, the electronic data corresponds to the architectural structure of the tower, but then it twists and turns repeatedly to detach itself from the concrete shape of the building introducing new virtual layers that dynamically interweave with each other.


Here is a cool video on YouTube and here you can find more colorful images.

For more info check out this and this.
Posted by Bash Mohandis at 16:52 No comments: 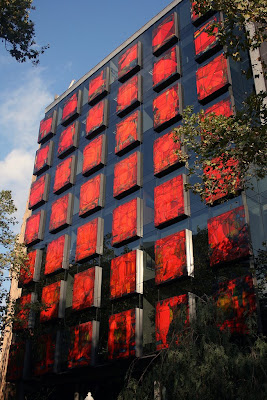 Found this amazing photo while browsing flickr and tried to look up the building for ages without any luck at all. Someone said in the comments that it might be a "Bank in Aviguda Diagonal in Barcelona" but that doesn't lead to anything. Does anyone out there know what’s the name of this cool building?
Posted by Bash Mohandis at 19:46 4 comments:

Edge of Arabia is an exhibition organized by Offscreen Education Programme and located at SOAS Brunei Gallery, University of London. Its supposed to "shed new light on the largely unknown contemporary art culture of Saudi Arabia". The main theme of the exhibition is "the complex and diverse identities of 21st century life in the Middle East". An interesting exhibition that is definetly worth visiting. As an architect, there is one particular piece that really stood out for me, and that is a tiny brochure that contained the art works of Mohammed Farea, who happens to be an architect too. 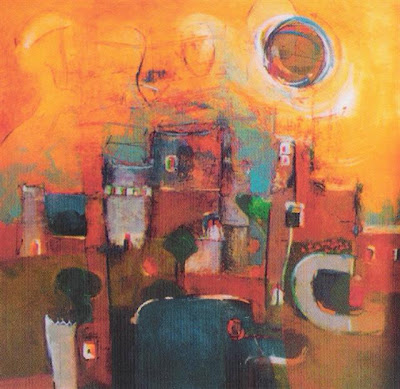 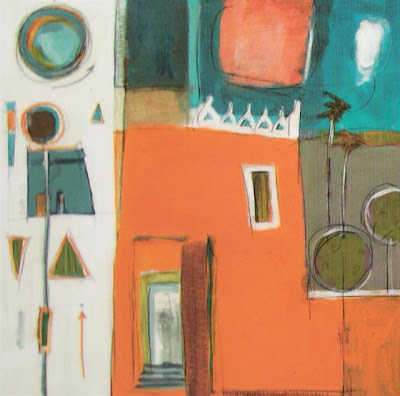 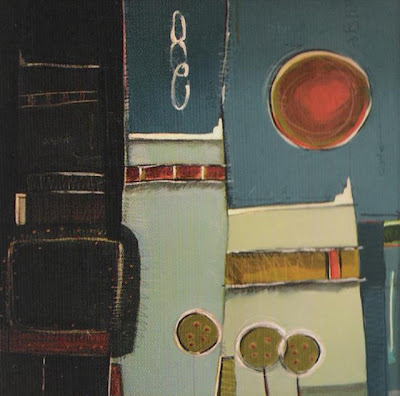 Perhaps what appealed to me is the colorful architectural presence in his work. The stylized buildings may be inspired by the traditional buildings of Najd region in Saudi Arabia, yet ever since I saw these works I couldn’t stop thinking about this book that I casually browsed once about the region of Asir. The vernacular architecture of Asir is mesmerizing in its wonderful and colorful frescoes that decorate the mud brick houses, which are also echoed in the bright colors of men's clothing, giving them the nickname of "flowered men". So I decided to go back to the library and scan few photos to add them to my collection. The book, "Impressions of Arabia" by Thierry Mauger, is a photographic demonstration of the region's architecture, frescoes and lifestyles of the people which are influenced by each other.

What makes the vernacular architecture of Asir so special is that while in other regions of the peninsula decorations are carried out mainly inside the house; here the decorations are spread throughout the entire house, inside and out, appearing on the facade too. The beauty in all this to me lies in "the division of labor which is determined by competence and gender". Men would be responsible for the hard labor of building the houses, and women are responsible for the more delicate task of decorating the house. Thus, the frescoes are not seen as works of art only but as a reflection of the skills and personalities of the women of the house. In these fresco decorations, women found a way to express their "domain" in a masculine culture that requires women to withdraw from the public eye. So it comes as no surprise to know that this is a skill that requires apprenticeship and is passed from mother to daughter, just as masonry is passed from father to son. 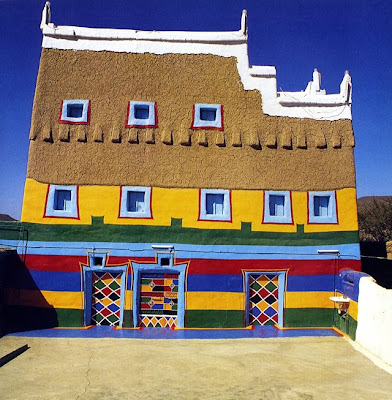 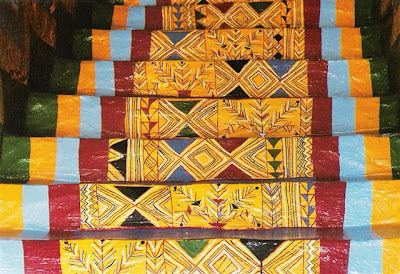 The colorful frescoes carry on from the facade to the interior stairs. 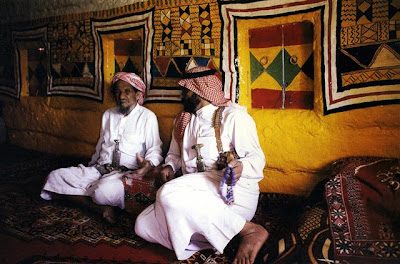 The majlis is the most special room in the house and thus most decorated one as well. 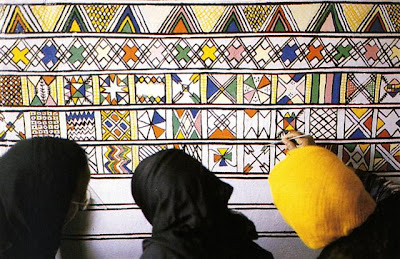 Fresco creation requires team work as shown by this mother and her 2 daughters.
Posted by Bash Mohandis at 15:58 No comments: 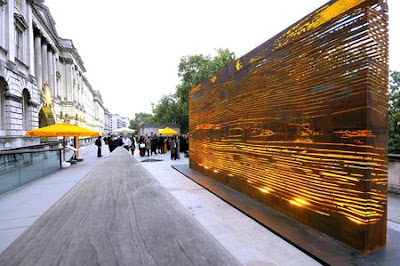 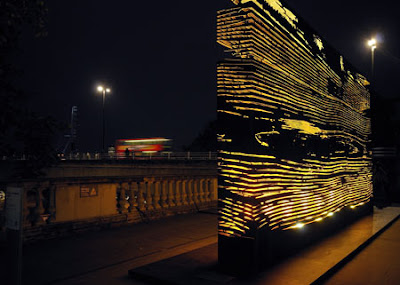 My obsession with mashrabiyas and anything with the slightest relevence to them is clearly evident in the number of posts published here on this blog about the subject. The latest addition is this installation called Portrait by designers Fredrikson Stallard at Somerset House in London. To me it carries a striking resemblance to the Dairy House located (ironically) in a town called Somerset in the UK.

The structure is constructed out of steel and represents wood grain. Light is introduced to the structure in a wonderful way that creates positive and negative spaces during day and night, an interplay that defines the external characteristics of mashrabiyas as well. In daylight the steel sections that represent the wood grain are the dominant feature. At night, however, the spaces in between will glow in a remarkable yellow illumination, representing the colors of the champagne brand that the installation is created for, Veuve Clicquot.
Posted by Bash Mohandis at 18:21 1 comment:

Why is Islam scary?

I am not sure if this is even a word, but is Europe afraid of being "Islamicized" again? The Muslim world was successful once in controlling a major part of the Iberian Peninsula for more than 7 centuries, which have left a fundamental presence on what is now known as Spain. That being said, this was only possible after long years of wars and battles. Today, however, "Islamicization" is re-emerging in a different way. Islam is spreading throughout Europe by the integration of Muslim immigrants in European countries for generations now. Their participation in the economical and even political development paved the way for Islam to become an accepted part of the European culture.

Now these are rough figures taken from Wikipedia, but with around 1 million Muslims in Spain, 1 million in Italy, another 1 and half million in the UK, 3 million in Germany and almost 6 million in France, some non-Muslims will naturally get scared. And if the numbers themselves are not enough, the government aid and protection for the Muslim minorities in many European countries is ringing alarm bells all of Europe. 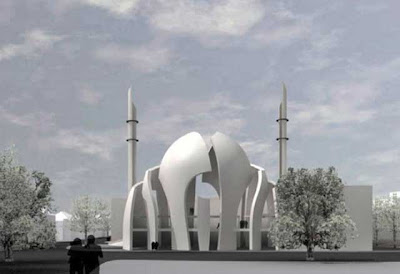 Perhaps the latest sign of this is the approval of building Germany's largest mosque in Cologne. Situated 2 miles away from Cologne Cathedral, the largest Gothic Church in Europe maybe even the world and a UNESCO world heritage site, the amazing mosque is designed by architect Paul Böhm whose specialty is church design. When asked whether he is personally religious, the architect answered:

Religious, yes, but I am not a practicing believer. And I am also not a Muslim. I am often faced with this question. Yet, you don't have to be a criminal to build a prison or be sick to build a hospital! Instead, what is important is the art of empathizing with the needs of those who will later use the building being designed.

The opposition that the mosque is facing is incredible. Some people are seeing it as a threat since it may become a symbol of power while others see it as a positive sign of integration. Personally I don't see a big deal in building a mosque, especially when it is so elegantly designed. But again I am biased.

More info can be found here
Posted by Bash Mohandis at 20:22 No comments:

Here are some recycling ideas which like many others have caught my attention:

1- Cardboard boxes
Created by French architects 0-S as temporary installation at Hotel Saint-Côme in Montpellier in Southern France, its an extruded portico of boxes with playful holes that allow light in and views out. 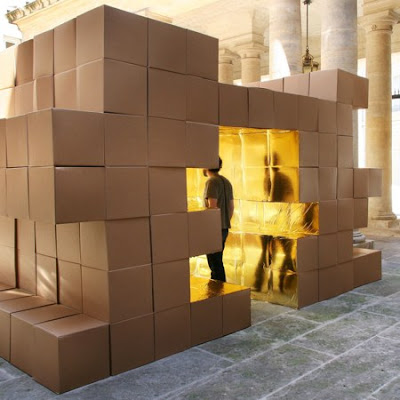 2- Plastic bottles
Built by American artist Jasmine Zimmerman to raise awareness of the alarming problem of plastic waste, this open-roofed greenhouse will be exhibited in empty lots, rooftops, parks, and vacant buildings to help spread the word. 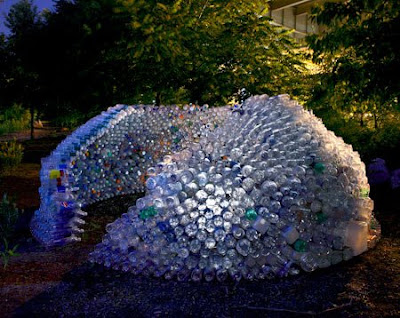 Posted by Bash Mohandis at 16:29 No comments: 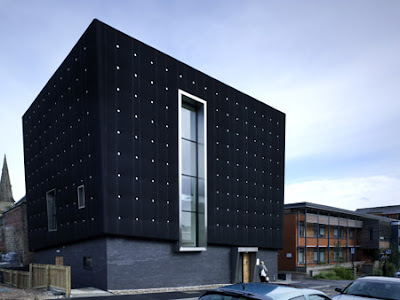 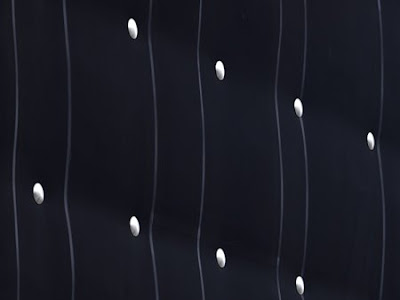 This Kaaba-like building is the University of Sheffield's new music studio designed by Carey Jones architects and delivered by Jefferson Sheard Architects.

The studio is enveloped in black rubber, the first of its kind in the UK, as a reflection of its acoustic requirements. The 450sqm building is 3 stories in height, rubber sheets are stretched and fixed over the top 2 levels then decorated with stainless-steel studs creating a quilt effect.

More info can be found here
Posted by Bash Mohandis at 21:33 No comments: 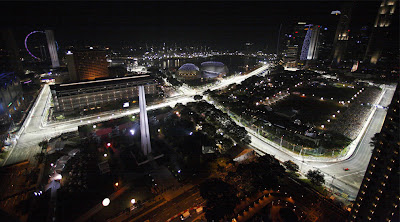 Check out these great photos of the first F1 race at night in Singapore.
Posted by Bash Mohandis at 18:14 No comments: