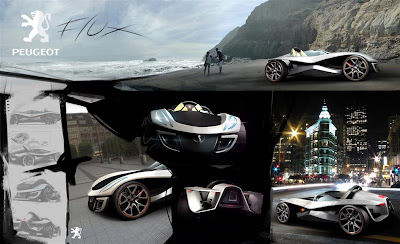 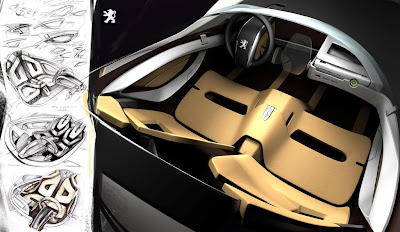 The winner of the competition provided an incredible design that took my breath away... I just hope Peugeot can wait a couple of 10 years until I can afford such a beauty... Screw Porsche, Ferrari, Aston Martin and any other sports car.... this is definitely the car I'm buying in my mid-life crisis.

The second winner was kind of cool too although it looked very conceptual and not very practical to me... more of the contest entries can be found here, here and here.
Posted by Bash Mohandis at 20:36 No comments: 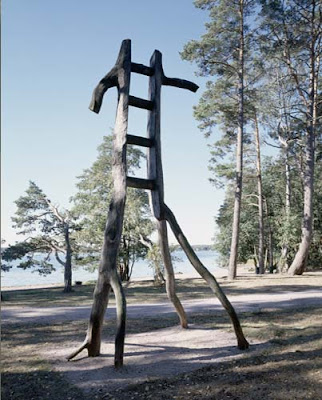 Ladder is a wood sculpture by David Nash realised at 1989. What really attracted me is how the form of the ladder resemble a living creature with arms and legs that seem to be in motion, bringing back life into what used to be a living being. It kind of looks like those giant talking trees in Lord of the Rings.

"In his environmental art, David Nash from Wales has concentrated on wood and makes use of existing natural features. He has created works with the theme ladder all over the world, in Japan, England, Ireland, as well as Karhusaari, Espoo. The sensation of ascending and descending expressed by the verticality, the transition from one space to another, are recurring themes in Nash’s art. For him, a growing tree, as well as a ladder, are like the Biblical Jacob’s ladder; they embody the connection between heaven and earth."
Posted by Bash Mohandis at 22:14 1 comment:

Cultural Capital of the world???

I like to vote for Abu Dhabi to be the cultural capital of the world in 2012. By that time, the city would have been blessed by the likes of Ando, Hadid, Gehry, and Nouvel. By that time museums that carry names like "Louvre" and "Guggenheim" and perhaps "MOMA" would have been completed and open for the public. The city would be home to one of the F1 races as well as a Ferrari theme park.

But the real reason for my choice is a wonderful architectural jewel designed by none other than Jean Nouvel; The Louvre of the Desert. 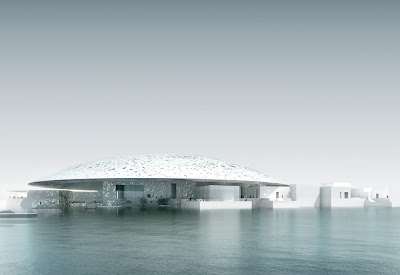 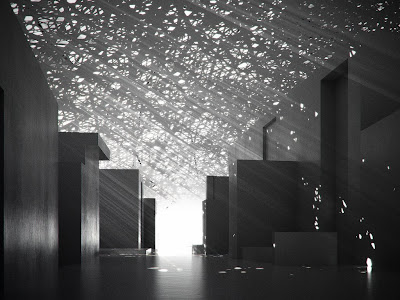 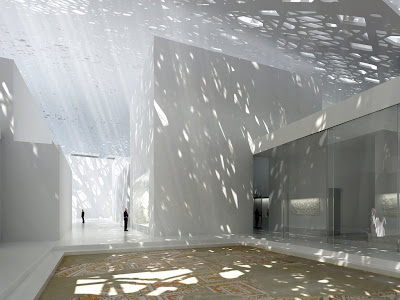 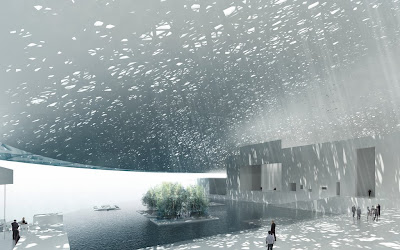 Approachable from land and sea, the design concept seems to take the form of a city. Hidden or protected under a dome with leaves-like openings, light filters through gently creating a romantic metaphor for an oasis of priceless exhibits in the desert of Abu Dhabi.

Images found here
Posted by Bash Mohandis at 19:50 No comments: 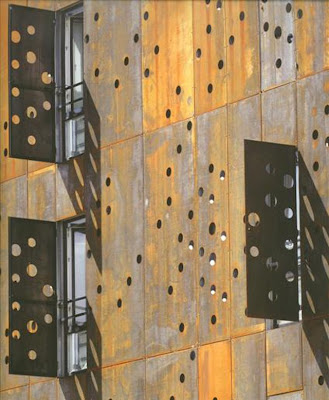 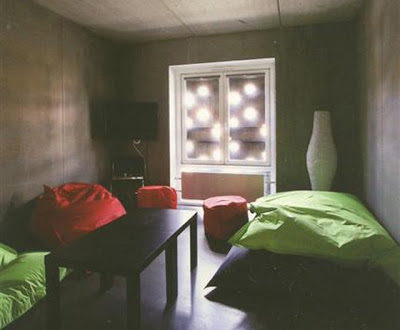 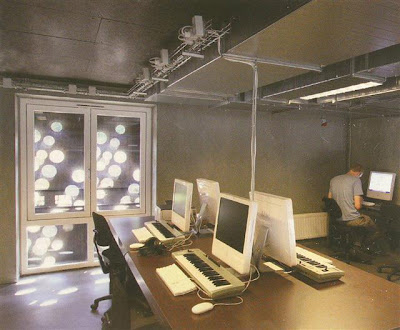 "Performers’ House is located in the centre of Silkeborg, at the heart of the Paper Mill’s revitalized industrial history. A historic building is to be transformed, and a new building designed. Spacious performance areas, teaching rooms, a canteen/restaurant, a student café, student accommodation, housing for teaching staff. On the ground floor internal folding walls and red curtains that can be opened and closed provide endless potential for varying interiors. The façade too is versatile: shutters on the main stages fold up and can be slid to one side and the large glazing elements be opened up to the town. Music is thus rendered audible and the theatrical performance visible to passers-by. Between the existing Boiler Building and the new building, a plaza will be created that ties the two together."
Posted by Bash Mohandis at 14:23 No comments:

The Best Resort in the whole World !!! 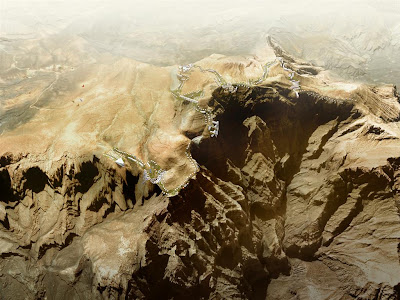 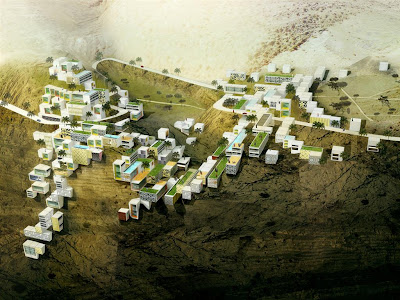 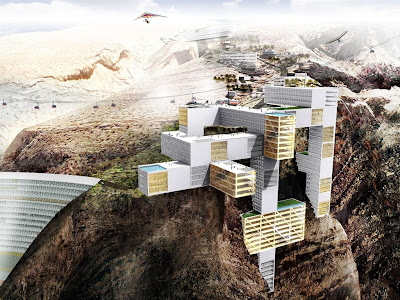 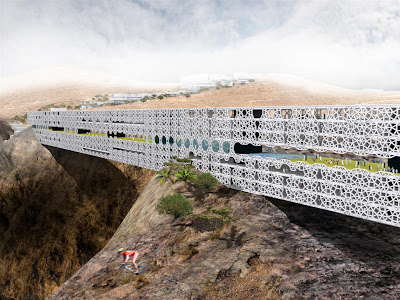 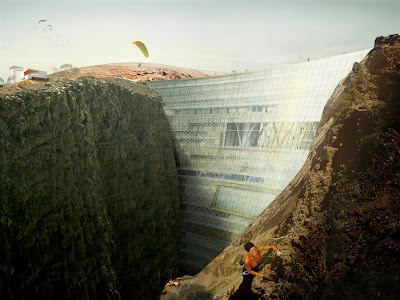 An magnificent resort that could bring Ras Al Khaima up to rival Dubai and Abu Dhabi in the UAE. Still in its concept design stage, the resort consists of scattered cities along a pathway that exploits the best of the mountainous landscape without compromising the amazing natural setting. It also includes a high-tech habitable bridge and a dam along with terraces and public plazas. The contrast between the modernist white cubes decorated in Arabic geometrical patterns, and the dark mountains may very well mark this resort as the number one getaway vacation destination in the world.

Eco Cities... A Continuation of an Arabic Tradition

As an Arab who believes strongly in the continuation of traditions in all aspects of life from fashion, music to architecture; yet open to contemporary aesthetics that will help strengthen the traditional values of this culture... I am really thrilled with where these projects are going. 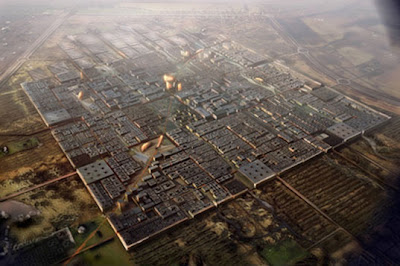 The concept of the mixed used, high density, walled city is a traditional urban strategy that existed long ago. Perhaps the main incentive to such structure is to create a strong defensive and well protected city at a time were unfriendly visitors with destructive intentions were very common in a region that have always witnessed conflicting interests. That aside, such cities allow for a pedestrian friendly environment in a harsh unbearable climate. The shadows cast by buildings on the narrow streets formed by the high density protect people from the glaring sun. The structure of the city also enforces the sense of community, the interaction of neighbors and trade which achieves a self sustaining city.

Recent projects in the GCC countries all aim to achieve those objectives that lead to a self-sustaining community. During the past few years we've seen many mixed used urban development with extravagant schemes such as the Palm Islands in Dubai and Financial Harbor in Bahrain and many more. And even though the element of regional and cultural identity have always been an important factor; none of the projects I've seen have hit me in the right spot like the above projects by Foster and Koolhaas. Just by looking at one of the greatest examples of human settlements in one of the oldest civilizations in the world, Shibam in Yemen, you will understand my infatuation with those schemes and how I see them as amazing modern interpretation of traditional Arabic architecture. 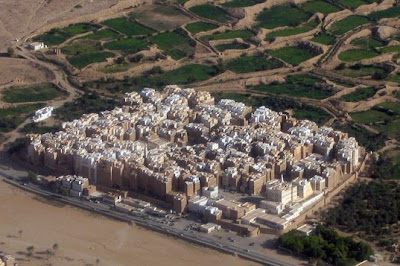 The walled city of Shibam in Yemen
Posted by Bash Mohandis at 19:07 No comments: 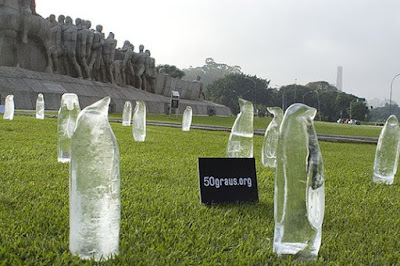 50graus.org is an anonymous website concerned about global warming. It's trying to urge people to think/discuss global warming and its effects away from the political/commercial/organizations trend.

One of the activities carried out to show their concern is public installations. This is an installation in Sao Paolo of Ice Penguins. The Penguin population have declined by 50% and one of the main reasons is the increased temperature which reduced Antarctic sea ice. Placing these ice penguins and letting them melt down until they disappear completely is truly a very moving display of what could actually be a reality one day.
Posted by Bash Mohandis at 16:32 No comments:

Graffiti is often regarded as an act of vandalism... but how can you frown upon such an artistic display that can produce magnificent architecture as shown above?

This is the first condominium designed by Herzog & de Meuron in the US. And what a piece of architecture it is. The cast aluminum gate is inspired from graffiti that New York is famous for. It's carried through the interior of the building suggesting a "random, haphazard, and variegated vernacular of the downtown New York streetscape". More details can be found here and here. 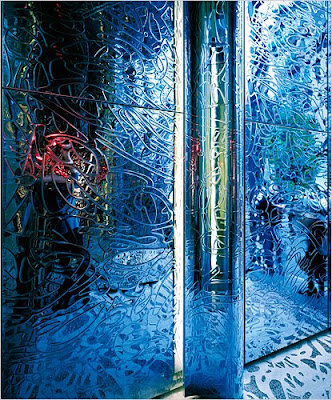 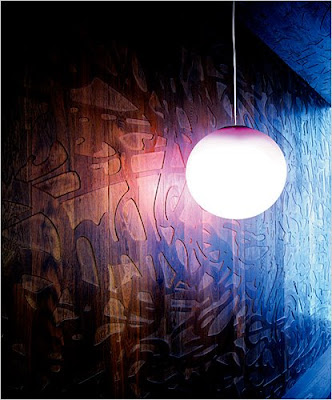 I can't help but notice the presence of graffiti in some of their other notable projects. Perhaps most clearly in their Flamenco cultural center in Jerez de la Frontera, Spain. 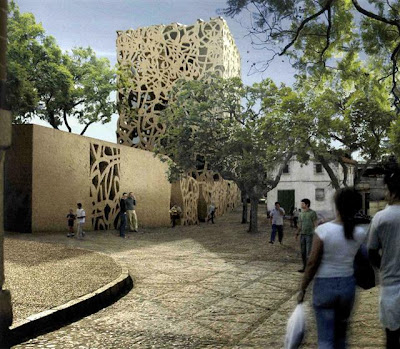 In this project, the Gypsy tradition of the Flamenco, Arabic Calligraphy and New York Street Culture Graffiti tags come together to form the pattern of the facade screen as represented in the below diagrams. 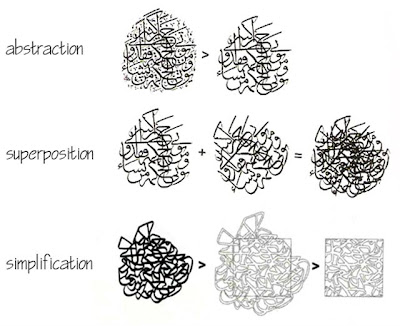 Another project comes to mind is the Cottbus University Library in Germany shown below. The glazed facade on this building is animated by texts in different languages and alphabets that have been superimposed in so many layers that they are no longer legible, but still appears as an unmistakable pattern of written signs. 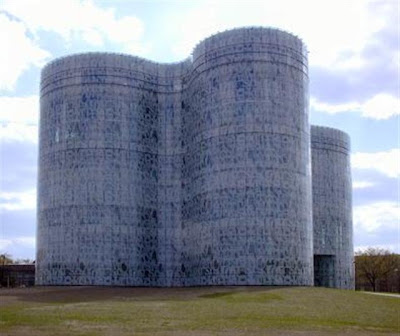 Although there are other projects with similar facade patterns, they are not necessarily "graffiti inspired". An example of that is Tree Village Campus in Beijing, China. The idea behind the project is to develop a pattern specifically for this project which is used at multiple scales; from the master plan to the floor tiles. The pattern is derived from superimposing grids of streets which then appear as tree structures when seen at a facade scale. 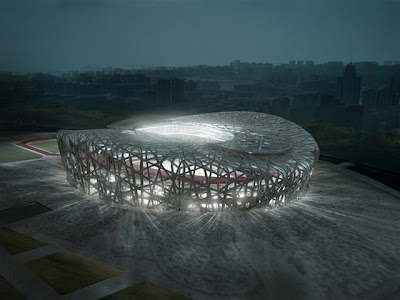 The above project is the National Stadium for the 2008 Olympic Games in Beijing too. The pattern here is made up of structural elements supporting each other. The result is that the facade appears as a bird's nest or a tree and its roots. It is also a mechanism to achieve sustainable design allowing natural ventilation for the stadium.
Posted by Bash Mohandis at 19:37 1 comment: