Personally, H&dM's tower looks more interesting, yet OMA's has a better relationship to the main street, at least that what the renderings show.
Posted by Bash Mohandis at 16:29 1 comment: 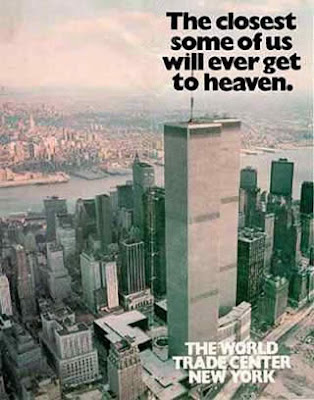 Here is a brochure image for the WTC created at 1984. More can be found here.
Posted by Bash Mohandis at 13:54 No comments: 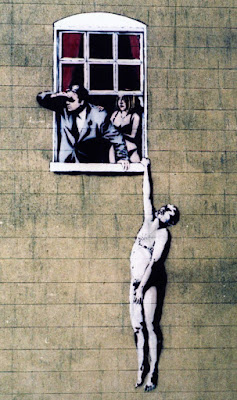 One of the famous Banksy's graffiti, which the people of Bristol voted to keep. 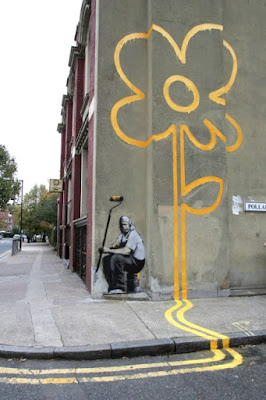 Another typical satirical Banksy's graffiti, or as he likes to call "outdoors art".

An anonymous artist, or a glorified vandal according to city councils that have to clean up after this guy. Either way, Banksy is a British graffiti artist whose identity and biographical details are uncertain. Yet his "interventions" has left a mark on the underground world of many cities, which are documented and exhibited in many galleries that are visited by the likes of Brad Pitt and Angelina Jolie. Banksy's work is mostly satirical pieces of art on topics such as politics, culture, and ethics, presented in a distinctive stenciling technique combined with some catchy graffiti writings.

A excellent idea that Microsoft can use against Mac, to strike back at their stupid "Mac vs PC" campain. 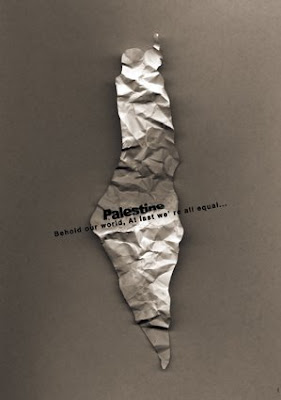 This is another picture that I discovered among my unsorted downloaded images. I tried to retrace my steps to remember where I saved this picture from with no positive result. Anyway I thought I might as well post it here as it is a great symbolic piece that pretty much sums up the situation that our Palestinian brothers are in.
Posted by Bash Mohandis at 06:49 No comments: 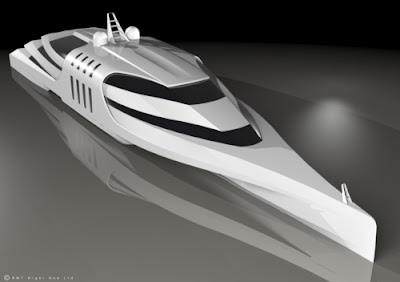 As I was browsing the 2008 Monaco Yacht Show Top 10 Concepts, I came across this striking project by BMT Nigel Gee called Véloce, a 130-meter pentamaran concept developed for high speed application and aimed at the large yacht market. Unlike the 40-m Signature Series by Norman Foster, the appeal of this concept to me is that it maintains its maritime characteristics albeit with an unconventional approach.

In an interview in Super Yacht World magazine, Foster said, "I wanted people to go WOW when they see this yacht, not just acknowledge it as something pretty." However, my reaction to the design was not a "wow", it may have been something more like a "hmmm". I mean it is unique but the design with its balconies, staircases, grills across the entire side walls, the arch form of the boat is very building-like, and perhaps it looks like it longs to be part of the land rather than the sea. The Véloce on the other hand simply look much more comfortable in the middle of the ocean than parked in the marina. Something that yacht enthusiasts, I imagine, would appreciate more.

More info here and here
Posted by Bash Mohandis at 01:03 No comments: 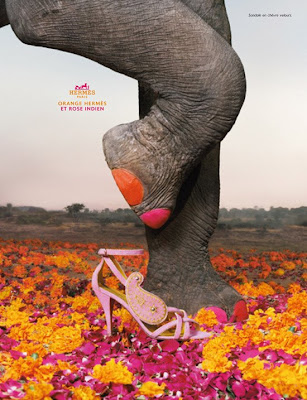 This may be a bit too girly for my taste... still I have to admit that this is one clever and catchy ad campaign by Hermes. This particular shot stood out for me... the pink huge high heel shoe, the colorful flowers and the gigantic painted nails create this playful contrast against the hard wrinkled gray skin. But more importantly is the way the elephant's leg is bent... it looks to me so feminine that surely there is no way this is a male elephant.

More can be found here.
Posted by Bash Mohandis at 03:24 No comments: 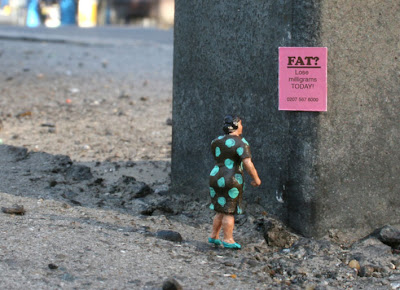 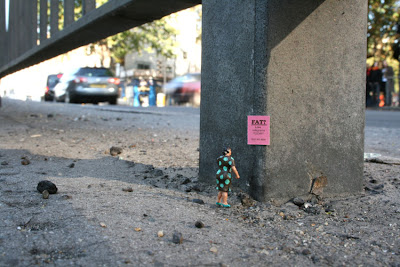 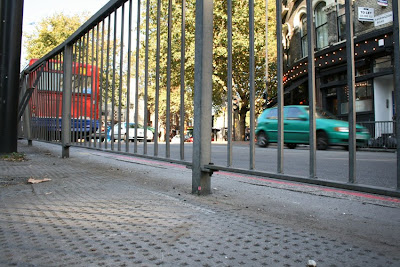 A new form of street art by "Slinkachu", consisting of tiny hand-painted miniature installed in all sorts of public spaces, mirroring our own lives. Although they might look to some as the musings of 5 to 10 year old kids, these street art installations are photographed in different scales, uncovering the city landscape in unexpected ways, depicting the general feeling of being alone in a large city. Scale here is the key factor in which both installation and photography of the artwork manipulates our perception to reveal this hidden micro-world and to evoke our feelings and senses.

A new book entitled "Little People in the City" has been published documenting these experiments, which is now on my to-buy list. Here are some photos of an installation for the Nuart event at the Rogaland Kunstmuseum in Stavanger, Norway, which again shows a great way of playing and experimenting with scale. 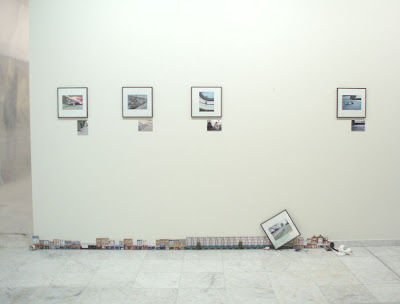 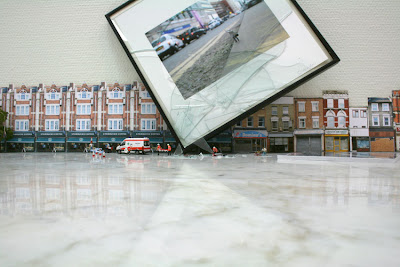 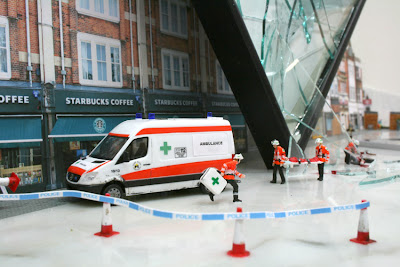 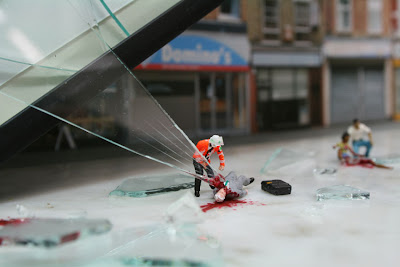 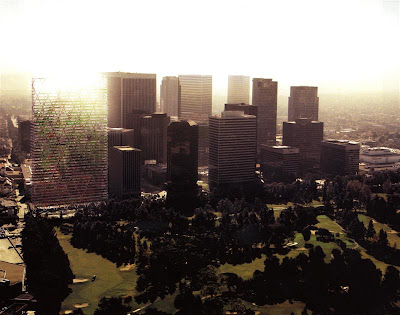 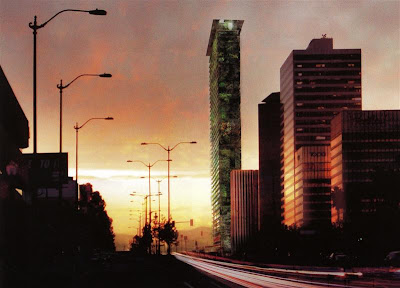 Jean Nouvel is set to build another iconic building, this time in the far west. Selected by SunCal Companies, the residential landmark is located in 10000 Santa Monica Boulevard in Los Angeles.

The building’s façade is a distinctive luminous/transparent glass integrated with a vertical landscape. It is supposed to be a green project that will earn itself a LEED Silver certification. 10000 Santa Monica Boulevard, will be an iconic gateway to Century City. It is situated on a now-vacant 2.4-acre site and will reenergize the area by bringing 177 new residences to what was once an office building and a restaurant.

According to Nouvel, the concept of the project stems from the idea that “21st century contemporary architecture must express the art of living in a particular place at a particular time.” Thus, the building will extend the horizontal landscape vertically. This is achieved as the residents will experience the city from behind the plants that surround their homes, manipulating the foreground and background.

The background will consist of a striking landscape as each home will face in two directions. The higher floors will also reveal downtown districts lights and the Santa Monica Mountains. The foreground however will gradually open up to the background as vegetation enters the home transversally in the form of interior gardens planted by the residents. The interior space of each unit extends out beyond the glass line onto a planted balcony landscape. The plants grow hydroponically, without soil.

“The green blade is thin, eleven times higher than it is wide. It tries to prove that it is possible to tame height by simple pleasures like reflections, shadows, and vegetation vibrating against the depth of faraway horizons.”
Posted by Bash Mohandis at 11:55 No comments: 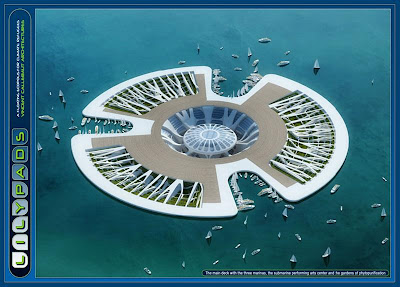 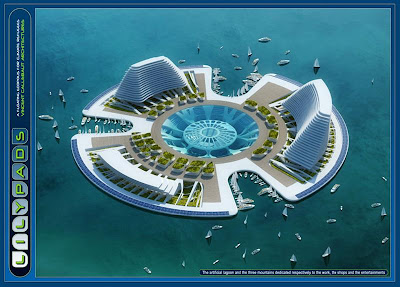 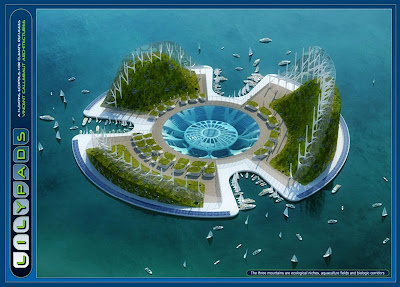 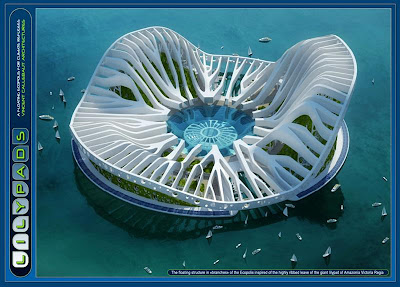 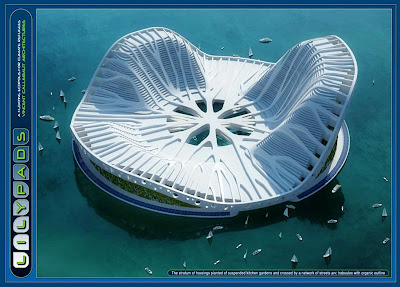 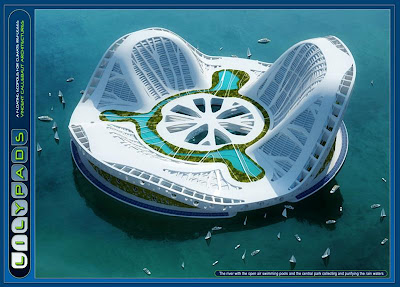 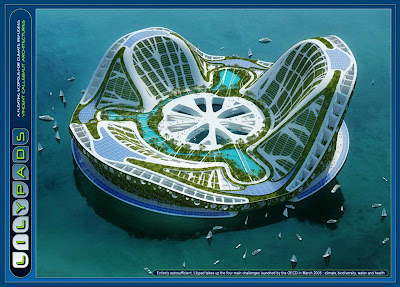 Series showing the phases of the city's construction

It seems that Belgian architect Vincent Callebaut shares my love for Kevin Costner's Waterwold, as evident in his design for Lilypad City. The city is designed for the year 2100 or so, and would accommodate up to 50,000 ecological refugees, who are called "Atoll dwellers" in the movie, after the polar ice caps melt and flood the whole planet.

The floating structure is inspired by giant lily pads, hence the name. The city takes up the challenge of reaching a positive energetic balance with zero carbon emission. This is achieved by the integration of all the renewable energies; solar, thermal and photovoltaic energies, wind energy, hydraulic, tidal power station...

The heart of the city will be a central lagoon of soft water collecting and rain water purifying. Around it will be located three marinas and three mountains dedicated to the work, the shops, and the entertainments. Each "mountain" will be covered by planted housing in suspended gardens crossed by a network of streets with organic outline, creating a harmonious coexistence between humans and nature. 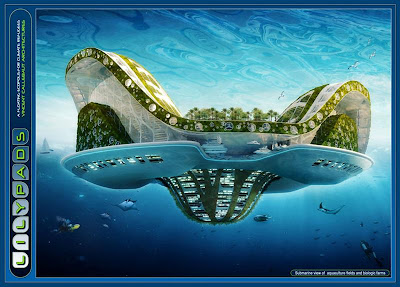 Fish-eye view of the city 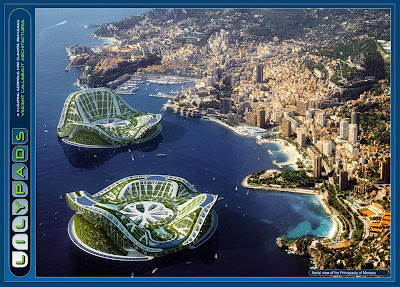 Lilypads along the coast of Monaco
Posted by Bash Mohandis at 00:59 No comments: 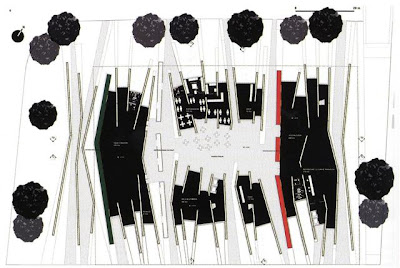 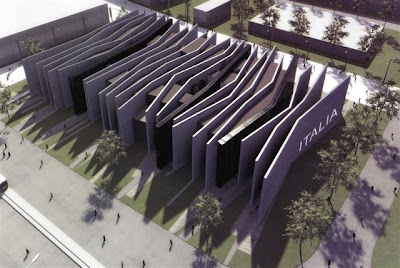 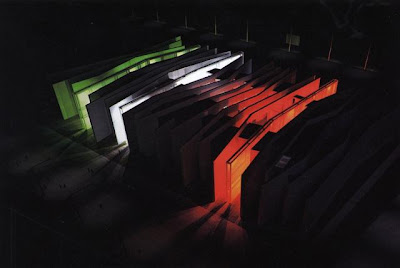 Scanned from L'Arca magazine, this is the 3rd place winner of the Italian pavilion Competition for Shanghai Expo 2010, which I thought looks like a better scheme than the 1st place winner.

The project is constructed around a shell, which is composed of a set of stratigraphic sheets evoking temporal succession, a metaphor for how Italian urban fabric was formed... Twenty sheets, the same number as there are Italian regions, with three "glass" stanchions placed between them and room to display Italian design on the inside, structure the pavilion's basic layout... The building is developed around a plaza-space, which is slowly revealed to visitors as they walk along the corridors constructed in the distorted space between the stanchions, like the streets of an old town centre in some Italian city leading to the carefully guarded hub or municipal square... The aim to respect and reflect the nature of its Chinese context means the Italian pavilion actually looks like a filtering structure open along the sides to allow people to see across to the other side of the river, where part of an old Shanghai neighborhood is still very much live.

Update: More can be found here
Posted by Bash Mohandis at 09:52 No comments:

Loop-d-Loop is a design concept by NL Architects for yet another innovative way for shipping container re-use.

[It] could serve as information booth, as exhibition space, as a ‘ride’, as ‘view generator’, as cafe, as site canteen... After sometime Loop-‘d’-Loop can be taken apart, transported elsewhere and be reassembled in a new way: a continuous process of destruction and renewal. It’s appearance always reminiscent of the building site, blending in in a twisted fashion.
Posted by Bash Mohandis at 01:42 No comments:

Can such an ugly feeling generate beauty?

Well, legend has it that Ferruccio Lamborghini, provider of the agricultural machinery that drove Italy’s post war reconstruction, was the recipient of poor customer service from another more established Italian manufacturer. Lamborghini was insulted after complaining about a clutch problem, indicating that a “tractor manufacturer was not qualified to criticize such a highly acclaimed sports car”. Resolving never again to own a car with a prancing horse, the engineer set about creating a rival.

The result was not only in the logo of the car; a charging bull made up of the inverted colors of Ferrari’s prancing horse. Lambroghini became the main counterpart to Ferrari in the Italian sports car business. This began with the Miura in 1966. Named after a Spanish ranch whose bulls have a proverbial attack instinct, the car soon was beloved of film stars and tycoons. 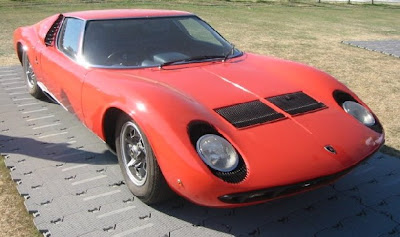 Lamborghini continued producing amazing sports car that rivalled Ferrari, with a tradition of naming cars after famous Spanish fighting bulls. The latest addition was the Murciélago which means "bat" in Spanish. It comes from a bull that survived numerous sword strokes and fought with such passion and spirit that the matador chose to spare its life, a rare honor. 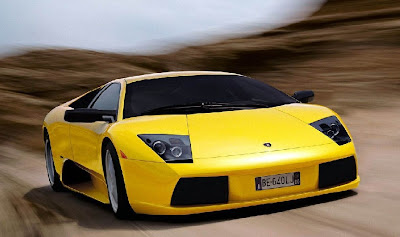 The latest, most powerful and expensive Lambo is the Reventón, which only 20 lucky people will own as reports indicate that no more than 20 examples will be manufactured. Reventón means "burst" in Spanish, and it is named after a bull who was best known for killing a famous bullfighter. 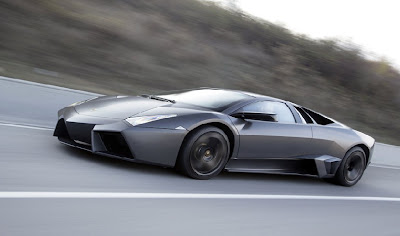 Posted by Bash Mohandis at 12:44 No comments: