I Shot The Sheriff... Bahraini Style

Oh yeah... nothing is better than the irony in hearing the Bahraini Police Force playing the legendary Bob Marley song.
Posted by Bash Mohandis at 02:00 No comments: 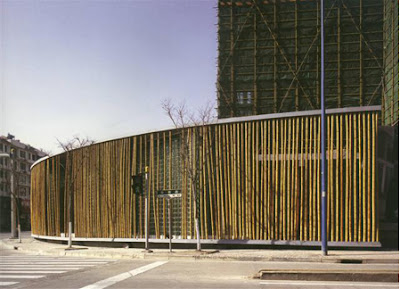 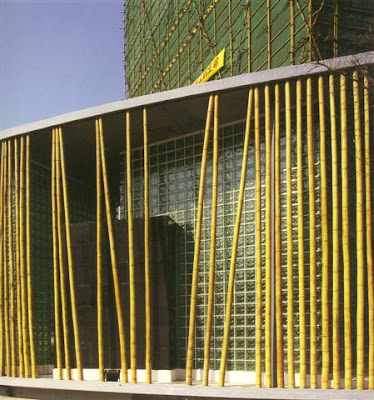 Located right at the crossing of two streets, the show room with only 150 square meters is the sales office for the development project under construction on the same spot. This tiny project consists of five rooms. Three rooms are made with glass blocks, one with stone and one is made of wood. Functionally the three glass block rooms are the sales office, while the stone box is for exhibiting the model and the wood box contains the restroom. On the other hand these three materials are used for the facade of the tower buildings. The separation between the sales office and the pedestrians is also made with a wall of glass blocks, while the bamboo batons on the outside create the transparent boundary of the building, seen as the edge to the curved profile of the street.
Posted by Bash Mohandis at 23:26 No comments: 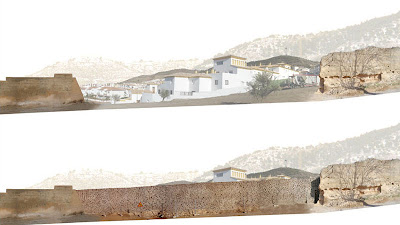 The Nazari wall is one of the ancient archeological remains of the Islamic presence in Granda, Spain. A large section of the wall was destroyed by an earthquake in the 19th-century, which remained as a void until Antonio Jiménez Torrecillas designed an intervention not long ago. 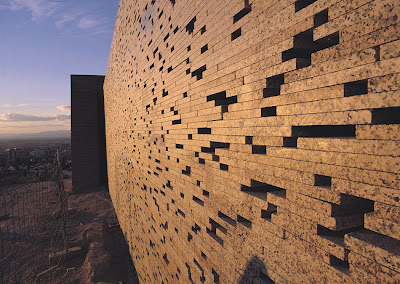 Local and national heritage regulations dictated that the new wall should be capable of demolition in the future without damaging the original construction. This required designing special foundations that kept the old ones and designing a wall that is stable but also demountable. The architect chose granite slabs to accomplish the last, dry stacking them in a manner that creates interest both inside and out. 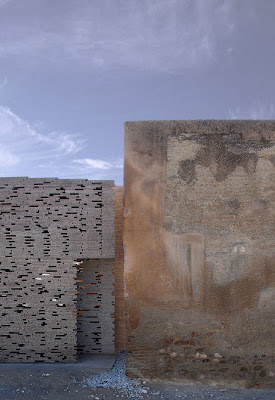 Influenced by "old military fortifications, the spirit of secret passageways and night patrols", there are two small openings on either side of the 40 meter wall allow access from one side of the wall to the other, via a narrow passageway between the two stacked granite walls. Torrecillas wanted visitors "to negotiate a world of light and darkness that is a part of the myth of underground Granada." Combined with the numerous apertures in the two walls, this space captures something of that essence without immediately recalling any specific historical form. 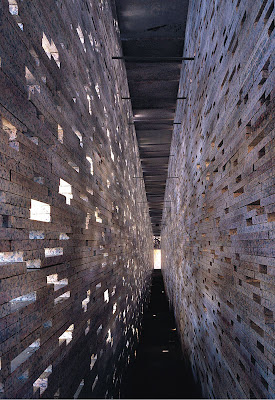 The intervention in Nazarí wall is the first step in a large urban design that will preserve the surrounding area.
Posted by Bash Mohandis at 02:44 No comments: 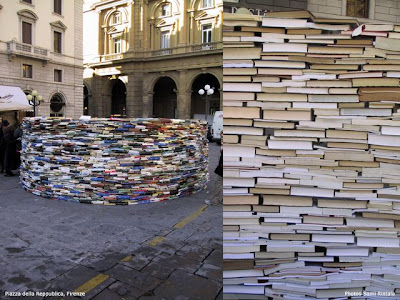 Here is an installation by Sami Rintala, a Finnish architect. 10 000 religious, political and philosophical books that would have otherwise been distroyed, were collected from universities and libraries around the world. They were brought to Piazza della Reppublica in Firenze, Italy, and used as material for the work. Seen from outside all different languages, titles and colours form a rich collage. Inside all is just harmonous white paper.

The installation was destroyed in only 30 hours by the citizens of the Reneissance town, although the books were written in languages they can never read, like Polish or Lithuanian. All the books taken home, the installation continues its life in the bookshelves of the Florentian bourgeosie.
Posted by Bash Mohandis at 23:22 No comments:

As I have been looking for projects with light filtering techniques... I stumbled upon this hotel designed by Plasma Studio. 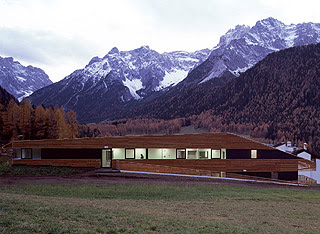 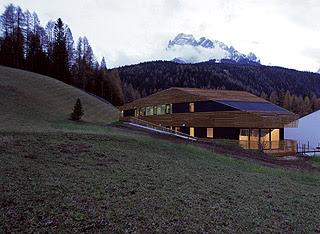 "Located on a steep hillside in the Italian Dolomites this new-built hotel has been developed as the interweaving of the free-flowing topography- indexed and organized by series of timber strips- and the serial sequence of apartment units perpendicular to it." 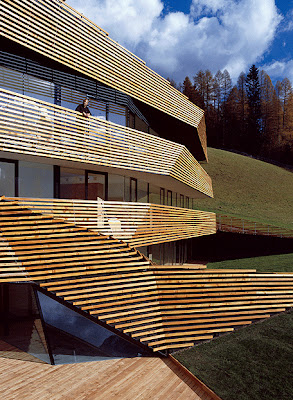 "From applying the logic of topographical mapping ie. the indexing of horizontal sections as continuous lines, the volume is formed as a series of strata that as an artificial entity maintains a dialogue with its natural environment." 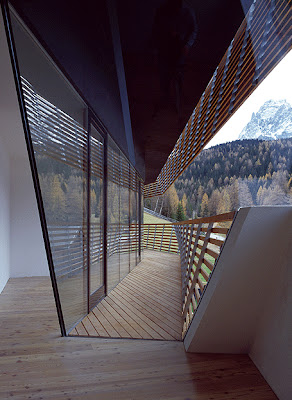 "The balconies become in-between zones that negotiate the internal rationale of the appartments ruled by efficiency and the repetition of parts with the exterior as extension of the topography." 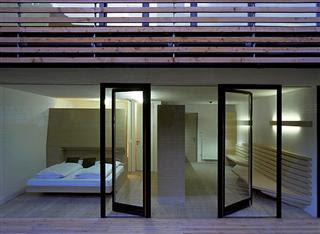 Posted by Bash Mohandis at 00:30 No comments:

Are architects running out of ideas???

I love Zaha Hadid. She comes up with these extraordinary forms which evoke all sorts of thoughts inside your head. But like other Deconstructivist architects she is beginning to repeat herself. Looking at her proposals for an arts center in Abu Dhabi and an art museum in Bahrain, I can't help but think of them as developing phases of the same scheme with slight variations in materials and functions. These projects are supposed to be landmarks, and even though they look great, copying a design idea and pasting it in different countries will take away its uniqueness. If you look at traditional architecture of each country, you can say that they are very repetitive even identical in many cases. Yet its difficult to say that the identical tower houses of Shibam are not unique, or the repeated skyscrapers of Manhatten lack soul. 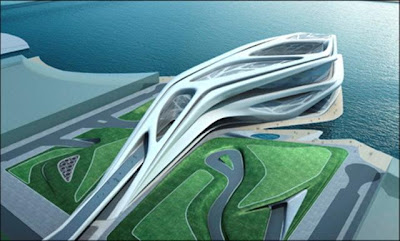 An arial view of the center in Abu Dhabi 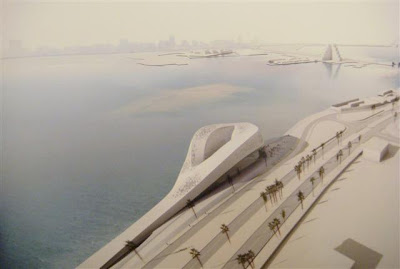 An arial view of the museum in Bahrain
Posted by Bash Mohandis at 13:03 1 comment:

According to wikipedia, Picasso said, "That man is of greater worth than I am!"

Known as Manitas de Plata which means "little hands of silver", this flamenco guitarist comes from the same extended family that members of Gypsy Kings also belong. In fact, Tonino Baliardo who is the lead guitarist of Gypsy Kings married his granddaughter. I guess hanging around a genius does make you a genius after all.

This lovely song is known as "Galop de Camargue". From what I read Manitas de Plata was famous for playing every year at the Saintes-Maries-de-la-Mer Gipsy pilgrimage in Camargue, Southern France. So I guess the song is either inspired by this event or was played frequently in it.

On another note I read once that the word "flamenco" is actually derived from Arabic. It came from "fallah mengo = فلاح منجو" which means "escaped peasant". I wonder if subconsciously that is the reason why I love Spanish music especially Flamenco.
Posted by Bash Mohandis at 23:45 No comments:

Email ThisBlogThis!Share to TwitterShare to FacebookShare to Pinterest
Labels: Music

"Running the numbers" is a series of large detailed prints assembled from thousands of smaller photographs. Designed by digital artist Chris Jordan, the series looks at contemporary American culture through the eyes of consumption and statistics. Here is an interesting interview about his work. 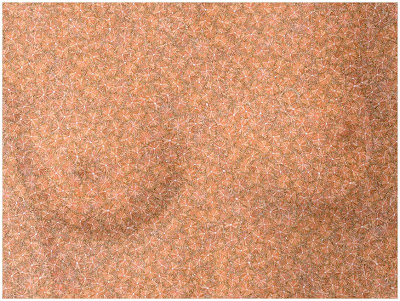 Depicts 32,000 Barbies, equal to the number of elective breast augmentation surgeries performed monthly in the US in 2006. 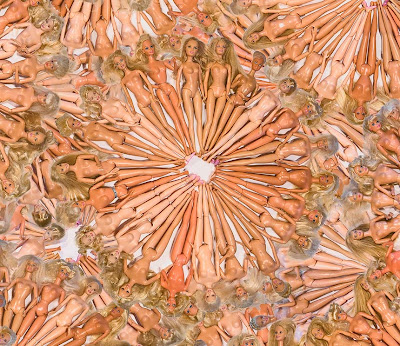 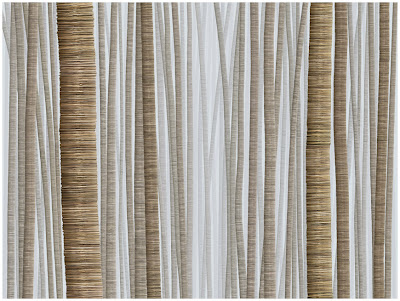 Depicts 1.14 million brown paper supermarket bags, the number used in the US every hour. 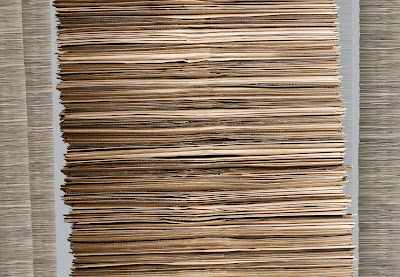 Detail at actual print size
Posted by Bash Mohandis at 19:54 No comments: