I haven't been a good blogger as of late. But when I saw the design for Saudi Arabia's pavilion for Shanghai expo in Arch Daily blog and the comments that followed, I started writing my comment until I noticed that it was getting a bit longer than I expected. So I decided to drop everything else and post my comment here on this blog and simply post the link to it. 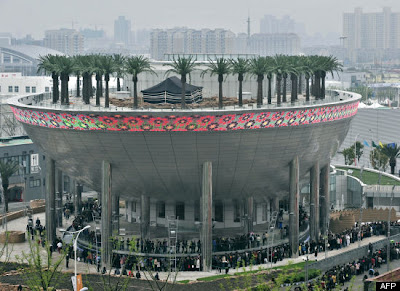 I am from Bahrain, not Saudi Arabia, but still from the same Arabian Gulf (or Persian Gulf as the West like to call it). It is safe to say that people from that area share the same culture, mentality, and perhaps even taste. After seeing the design of the pavilion I have to say that I thought to myself that this is a typical combination of Western complete lack of sensibility and Arabian blind eagerness and naivety. It 's a very shallow and superficial design for a pavilion. And if that reflects anything, it would reflect the shallowness and poor artistic taste of the designers rather than the values of a whole society, which many people seem to be eager and happy to say.
It is clear that the bowl (which is attracting most of the criticism) itself is not inspired from Saudi Arabia but from Chinese tradition which represent good luck, which is stated in the video. And it is supposed to be a gesture symbolizing the friendship between Saudi Arabia and China. What is supposed to reflect the Saudi culture here is the Islamic decorations on the surface of the bowl, the palm trees and tent, which, in my humble opinion, does not reflect what the pavilion is intended to display. According to the official Expo website, "The pavilion showcases the Arabian wisdom in creating wonderful city life in spite of the severe natural environment without rivers or lakes." I mean just look at the delicate details in the mashrabiyas of Jeddah and how they respond to the environmental and social needs of the society. Look at the playfulness of the bright colors of the vernacular architecture at the south of Saudi Arabia in the harsh Arabian Desert. Or you can even ponder at the magnificence of the engraved temples of Mada'in Saleh which date back to the Nabataean Kingdom. I am sure one of these architectural examples would have inspired a better pavilion design. 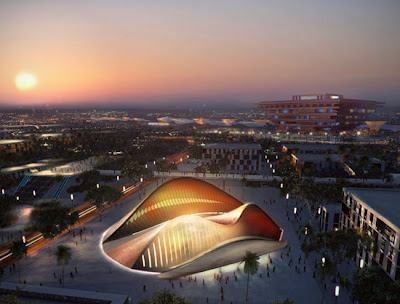 UAE pavilion
I said earlier "Western lack of sensibility" because I was assuming that the pavilion was designed by some European or American firm just like Foster designed UAE's pavilion, which I liked by the way. So I tried looking up who designed the pavilion, hoping to provide the evidence for those who jumped at the opportunity at criticizing a whole culture at the sight of few pictures of this pavilion. I did run into this blog though, which says that the pavilion "is a collaboration between architects from China and Saudi Arabia". And it was at this moment that I thought to myself again, "Now how can I prove those people, who are saying nasty things about our neighbours' artistic taste, wrong?"
I decided to look up other Arab pavilions, after all I was hoping to maybe visit this expo. Unfortunately I found out that most of the other Arab pavilion were very traditional and straightforward. As if the emphasis was not on being creative in design but more on building informative miniatures of what those nations are like. Again, I thought to myself, "This is very disappointing, I am sure that Arabs are better at architectural design than this. What can I show to prove this? Other than the magnificent mosques and palaces in Andalusia, Egypt and Turkey that existed for hundred of years, which are reflections of Islamic design more than Arabic?"
I remembered my visit to Venice Art Biennale. There I encountered two Arabic pavilions, UAE and Egypt. Now these are pavilions of art works, not architecture, but good taste can manifest itself in both I guess. The UAE pavilion wasn't that interesting with its models of modern developments in Abu Dhabi. But the Egyptian pavilion was an amazing experience. So I looked up the Egyptian pavilion in the Shanghai Expo, and yet another disappointment. Yes it was what can be called "modernly" designed, but I didn't feel that it will touch the visitors the way the art pavilion in Venice did. 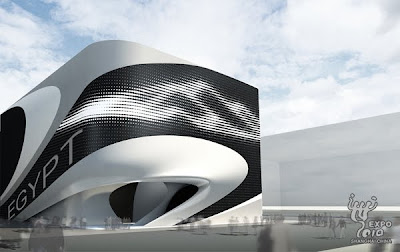 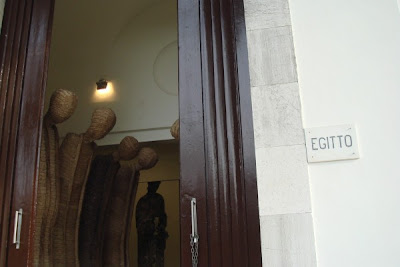 Egyptian pavilion in Venice Art Biennale
So what am I trying to get to? I guess I am trying to rationalize the hideous Saudi pavilion and here I am posting an irrelevant picture of the Egyptian pavilion from Venice Art Biennale. Some comments written about Saudis lack of taste where just simply annoying, although I have to admit that I understand why many would say such a thing in this particular instance. So I was just hoping that this post could open some people's eyes and see Saudi Arabia without the negative connotations that are associated with it in this day and age. Yet I ended up digging myself in a deeper hole. But I still stick to my initial argument that the poor pavilion design reflects the poor artistic taste of the designer, and maybe the people who gave the thumbs up for it, not the values of a whole society.
Posted by Bash Mohandis at 19:52 4 comments: